This is an installment in the series Sex For President, which considers the 2012 U.S. presidential race between Barack Obama and Mitt Romney in the historical context of previous U.S. presidential elections. To read more about the premise of Sex For President, read the first installment: https://americanparser.wordpress.com/2012/05/23/sex-for-president/

This was a game changer on a couple of levels. On one hand, Ross Perot tapped a real discontent that would continue to brew in the American people for decades to come.

On the other, Bill Clinton was to be the first Baby Boomer to become President of the United States, and there was some sexiness attached to that possibility, no doubt, especially with all seventy-six million Baby Boomers well above voting age by now. In the backseat of a car, most of us choose sex over discipline every time. The 1992 U.S. presidential election would be a classic example of that kind of passion ruling our judgment. And here’s the first hint of it, a coronation of sorts on the Arsenio Hall show, aired live on June 3rd, 1992:

That’s right. Bill Clinton was America’s first black president. But hey, don’t take my word for it. I could be just your average closet racist white guy. Take it instead from none other than black Nobel Prize Laureate Toni Morrison, who wrote in a commentary in the October 5th, 1998 issue of The New Yorker magazine about the congressional impeachment proceedings against Bill Clinton during the Monica Lewinsky scandal, that

African-American men seemed to understand it right away. Years ago, in the middle of the Whitewater investigation, one heard the first murmurs: white skin notwithstanding, this is our first black President. Blacker than any actual black person who could ever be elected in our children’s lifetime.

And how does Barack Obama feel about this? I’d say he’s okay with it, with a few caveats, based on his response below:

Bill Clinton’s sex appeal was a combination of charisma, boyish looks, and his reputation as a classic cad, on which he labored long and hard to make good. He hit his stride in the 1990’s for the same reason Hugh Grant did. And the saxophone stint on Arsenio cemented the deal in the simple minds of millions. Whatever George H.W. Bush was, he wasn’t fun. He was our old man, a real downer, you know? The Greatest Generation had had their run. With Bill Clinton as President, rock and roll, and the lifestyle that accompanies it, was coming to the White House, and would give rise eight years later to disputed reports that the Clinton administration left the White House like The Who leaves a hotel room.

In 1990, Pulitzer Prize-winning humorist Dave Barry, born less than a year after Bill Clinton, published a book called “Dave Barry Turns 40.” In it, Barry gives this description of what he would do as President:

…I’d be a terrible leader. I’d be such an inadequate leader that within a matter of days the United States would rank significantly below Belize as a world power. But at least I’d try to be an interesting leader. I wouldn’t be one more pseudo-somber, blue-suited, red-tied, wingtip-shoed weenie, frowning at the issues with sincerely feigned concern. I’d try to truly represent my generation, the rock-‘n’-roll generation that had the idealism and courage to defy the Establishment, stand up for what it believed in, march in the streets and go to Woodstock and sleep in the rain and become infested with body lice. If I were the President, I’d bring some life to the White House. The theme of my administration would be summarized by the catchy and inspirational phrase: “Hey, The Government Is Beyond Human Control, So Let’s at Least Have Some Fun with It.

The difference between Bill Clinton and Dave Barry was, Barry was joking (right, Dave?).

Don’t get me wrong. Bill Clinton is a very smart guy. But make no mistake. Clinton was and is a player, of everyone and for himself, first and foremost. If Newsweek had been honest, its cover after Bill Clinton was inaugurated in 1993 would have been “We’re All Bitches Now.” 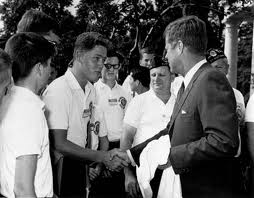 For Clinton and the machine behind him, the United States was a nation of pretty, easily flattered, naive young women. In 1992, we told our parents to go to hell, and we invited Bill Clinton into our bedroom. Twice. Why? He serenaded us. He seemed a little wild, but harmless enough. We thought we could manage him. He had shaken hands with the original King Arthur, and we wanted to believe him when he whispered promises of a return to Camelot as we felt ourselves perspire ever so slightly and chewed, slowly and unconsciously, on our bottom lip. He winked at us. We blushed and looked away. Then, turning slightly on our heels, we took his hand.

But who was Clinton, really? Well, that depends, of course, on what the meaning of “was” was. Like his ideological successor, we still don’t even know what we don’t know about Bill Clinton, and frankly, we’re okay with that. But strangely enough, for millions of women in America, and not a few men, it just doesn’t matter. Women fantasized about getting away with Clinton, and men fantasized about getting away with his mores. Behold, the Lamb of the Godless, who takes on the sins of the world!

The campaign and tenure of William Jefferson Clinton was semenal, a portent, a prototype, a calibration test to see if the plan could be accelerated. How far could the young man get before we realized just how naked we were? Despite his lack of personal discipline, Bill was a smashing success at his worst moments. He just never choked. Even in his carelessness were lessons to be learned. And boy were they. Take a look at him today. Our first black president is as white as snow.

Our First Black President – Recovering Quite Nicely, Thank You

One comment on “Sex For President 1992: Baby Boomers Become The Establishment”